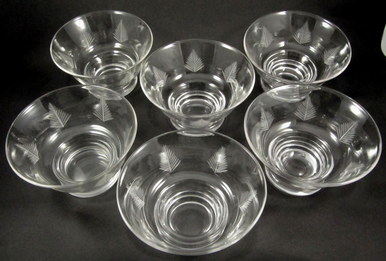 At the end of the First World War the celebrated Bohemian engraver Ludwig Kny (1869-1937) became chief designer at Stuart and Sons Ltd. and worked closely with Robert Stuart designing new cut patterns which became the main production of the factory.

The cutting was made brilliant by the introduction of acid polishing and this had an important effect on the type of patterns produced.

The most important events to affect British cut glass of the pre-war era were the exhibition “Modern Art for the Table” held at Harrods in 1934 followed by “Art in Industry” held at the Royal Academy, in 1935. The Harrods Exhibition saw a group of artists invited to submit designs to be produced both in ceramic and in glass. The glass was to be made by Stuart & Sons and artists included Paul Nash, Graham Sutherland, Laura Knight, Eric Ravilious, Gordon Forsyth, Ernest and Dod Procter as well as Stuart’s Chief Designer, Ludwig Kny. Whilst the designs were critically acclaimed the buyers were less enthusiastic, preferring the traditional designs that were tried and tested, and apparently sold well. The influence of these works is undeniable.