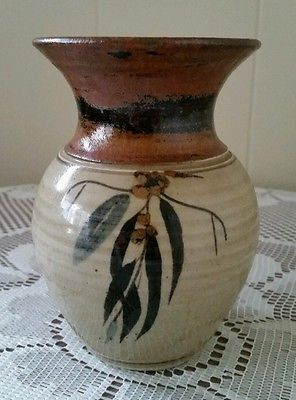 Edinburgh Pottery (1972-2005) located within the Sovereign Hill precinct in Ballarat, Victoria was set up by John Gilbert to produce wares in a 19th century style for the tourist market. In practice, it was a training ground for young potters, who produced a wide range of well-made functional items in the Anglo-Oriental style. Ironically, while Edinburgh Pottery flourished for many years in its Sovereign Hill setting, most of the domestic ware in use on the Ballarat goldfields was imported from the Staffordshire potteries of England. One of the reasons for its closure in 2005 was that, historically, such a pottery had never existed in Ballarat in the 1850s. Edinburgh Pottery ware is impressed ‘Edinburgh Pottery Ballarat’.

John Gilbert was born in Albury, Victoria. He worked as a teacher while completing a Certificate of Art at the Technical College in Marlborough, before moving to Ballarat in 1958. From 1960-61, he studied for a Diploma of Art at the Ballarat School of Mines and later lectured there until ill health forced his retirement in the late 1970s. At his studio at Mt Helen, near Ballarat, he produced works marked with an incised ‘Gilbert’ in a style quite different from the pervading Anglo-Oriental tradition. He had acquired a concern for form and an interest in sculpture from his teacher Neville Bunning, and from the British potter Hans Coper, whom he visited in 1968. As a businessman, he was also involved in the establishment of two potteries in Ballarat the Edinburgh Pottery (1972-2005) located within the Sovereign Hill precinct, and the Old Ballarat Pottery (1973-1994) located in the Old Ballarat Village opposite Sovereign Hill.