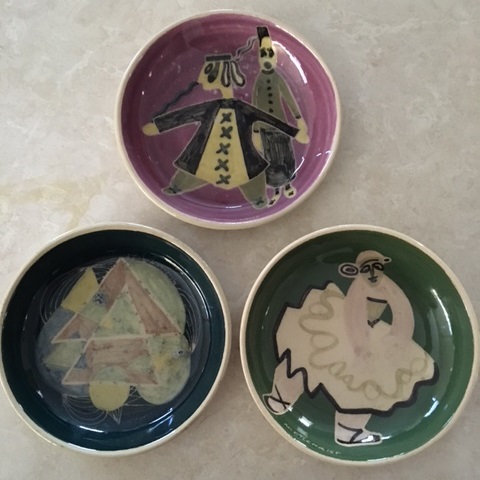 Melbourne born Tom Percy Sanders (1924-2008) returned to Melbourne in 1949 and by the end of that year his ceramic wares were selling through Georges Department Store under the name ‘Dorian Sands’.

He continued to build his skills as a thrower and decorator at the Hoffmann pottery in East Brunswick, at the Arthur Merric Boyd Pottery in Murrumbeena, and with John Perceval. His early ceramic work is signed ‘Dorian Sands’.

He set up his own studio with his wife Elizabeth in Eltham in 1954. His ceramic work from 1954 is signed ‘Tom Sanders Eltham’. In 1956, he started work on the first of a series of ceramic murals with Lawrence Daws. In 1959, he and his family left for London and spent three years in Europe, where he made a series of sculptures. Work made in London is incised ‘T.P. Sanders, LONDON’.

Back in Australia, in 1964, he abandoned pottery to concentrate on mural work. In 1967, he worked with the painters John Olsen, Fred Williams and Jan Senbergs on a series of decorative plates. From 1971-80, he was forced to give up pottery due to illness and turned his attention to the design of tapestries. For a short time from 1980-83, he returned to pottery. Work made from 1961 onwards is signed ‘T.P. Sanders’ or ‘Tom Sanders’.

Tom Percy Sanders trained as a sculptor at East Sydney Technical College from 1947-49, after serving in the war. While in Sydney, he worked as a decorator for fellow student Guy Boyd, in what was to become the Martin Boyd Pottery. For a short time he also joined David and Hermia Boyd in the studio they had set up in Paddington to make ‘Hermia ware’.